The hotel comprised of six floors, above ground, and two basements.

The fire was contained to a laundry room basement, but the smoke had spread to all rear rooms of the hotel.

Firefighting operations ceased at 09:33pm however crews remained on scene overnight to monitor and dampen down hotspots.

The Police were also in attendance.

The cause of the fire is being investigated by the Fire Service.

Group Manager Craig Thomas, Northern Division Commander for Mid and West Wales Fire and Rescue Service said “When crews arrived at the scene, they were met with a fully established fire in the laundry room and quickly established that they needed additional resources to contain the fire.

Our firefighters worked extremely well in arduous and complex conditions to extinguish the fire and stop it from spreading to the main hotel.” 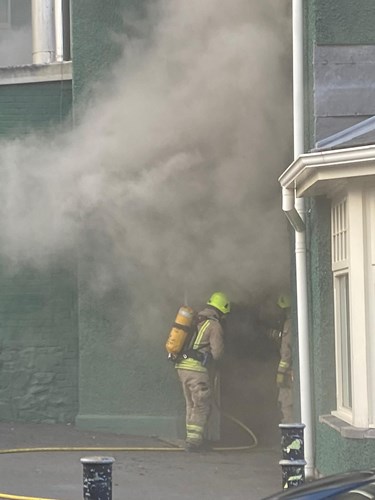