A Moment in History for Stephen Rowlands

It was with great sadness that we learnt of the passing of HM Queen Elizabeth ll on 8th September 2022. However, this was a day that had been long prepared for.

Mid and West Wales Fire and Rescue Service’s, Head of People Development, Stephen Rowlands was selected to represent the Service.

Stephen was involved with the preparations and coming from a military background where he served in the Marines, certainly set him in good stead for the task ahead.

Being part of a group of only 16 Fire and Rescue Service staff from across the UK was a proud moment for Stephen. Having arrived in London on Wednesday 14th September, Stephen was required to attend the first of a series of briefings which took place each evening at 19:00. Later that day, a coach collected the contingent at 22:00 to travel into central London, in full undress uniform for the only rehearsal. This involved the 100 civilian service contingents, 800 military personnel and three of the country’s finest military bands. The contingent assembled at Wellington Barracks in the early hours of the morning to join the military ranks outside Westminster Abbey where they completed their rehearsal some hours later.

The day before the State Funeral, Stephen took the opportunity to take a walk to Hyde Park to view the tributes that had been left for HM Queen Elizabeth II. Stephen said:

“It was silent within the park, only being broken by parents explaining to their children the magnitude of the event. The smell in the area from all the floral tributes was overwhelming.”

On the day of the State Funeral, Stephen was collected in the early morning to travel to the Wellington Barracks, in Westminster, where the preparations to march in the precession behind the Queens coffin commenced. Stephen recalled:

“I remember feeling extremely honoured to be a part of this historic occasion, as I stood with my other Fire and Rescue Service colleagues behind the Horse Guards marching at the rear of the gun carriage.” 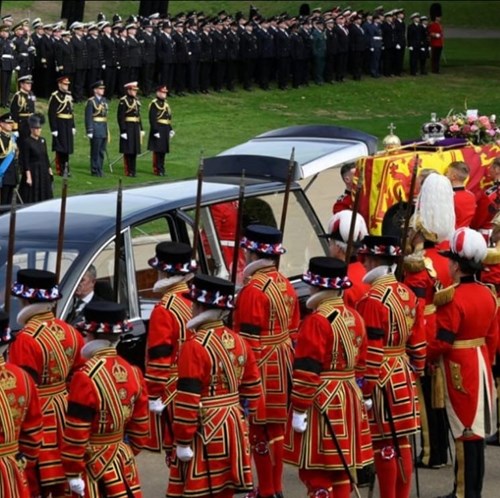 “It was a strange feeling, there were large crowds, but I didn’t really notice them; It was like being in a bubble. All that mattered was the march. I felt a pressure to get it right, to ensure that my steps were correct, it was nerve wracking to think that billions of people were watching our every move

The clapping from the crowds as we passed was surreal and with it brought a wave of emotions, it made me stand tall and feel ever so proud. It was a great sense of pride and a massive honour, to myself and my family to be chosen to represent the Service.

Being chosen to attend the State Funeral of Her Majesty Queen Elizabeth ll, representing Mid & West Wales Fire and Rescue Service was one of the biggest highlights of my working career – a true moment in history that I will be forever thankful for.”